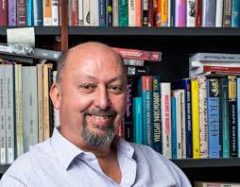 Warwick Anderson is the Janet Dora Hine Professor of Politics, Governance and Ethics in the Department of History of the University of Sidney and leader of the Politics, Governance and Ethics Theme with the Charles Perkins Centre. From 2012-17 Warwick Anderson was ARC Laureate Fellow in the Department of History and the Center for Values, Ethics and the Law in Medicine. In 2018-19 he will be the Gough Whitlam and Malcolm Fraser Chair of Australian Studies at Harvard University. As a historian of science, medicine and public health, focusing on Australasia, the Pacific, Southeast Asia and the United States, Professor Anderson is especially interested in ideas about race, human difference, and citizenship in the nineteenth and twentieth centuries. Occasionally he writes programmatically on postcolonial science studies and, more generally, on science and globalisation. He is the author of Luso-Tropicalism and Its Discontents: The Making and Unmaking of Racial Exceptionalism (Berghahn Book, 2019) with Ricardo Roque and Ricardo Ventura Santos; Intolerant Bodies: A Short History of Autoimmunity (Johns Hopkins University Press, 2014) with Mackay; Colonial Pathologies: American Tropical Medicine, Race, and Hygiene in the Philippines (Ateneo de Manila University Press, 2007); and The Cultivation of Whiteness: Science, Health and Racial Destiny in Australia (Melbourne University Press, 2002).