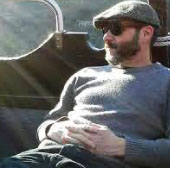 Miguel Moniz (PhD Brown 2004) is an anthropologist who has lived between New England, the Azores, and mainland Portugal over the past 25 years. Has an FCT postdoctoral fellow he studied migrant deportations, the law and discourse in racialization processes; socio-religious festivals and political ethnic group formation; and cultural practices in local and transnational contexts. His publications include Exiled Home (2004), a monograph about criminal deportations; “The Shadow Minority: An ethnohistory of Portuguese and lusophone racial identity in North America” (2009); “Adaptive Transnational Identity and the Selling of Soccer” (2007); and the World Bibliographical Series volume The Azores (1999).  In the Colour of Labour project Moniz researches racialization processes among migrant mill and agricultural workers in Portuguese communities in New England, examining the law, unionization, associativism and political community building.