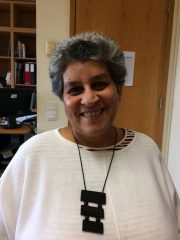 Isabel Noronha (PhD Unicamp 2018) was born in Maputo, Mozambique. She is one of the first directors of Mozambican cinema, having started her activity in 1984 at the National Film Institute. She has been working on the topics of identity and social vulnerability according to a dialogical and participatory film-making perspective. From 2011 to 2014, she made experimental movies mixing documentary and animation, looking for a language that could deal with social issues (such as HIV-AIDS, labour and sexual exploitation, child trafficking), without exposing the protagonists of stories. Since November 2019, she integrates the project “The Color of Labour” where she exploring southern Angola, under the guidance of PI Cristiana Bastos, for the elaboration of a documentary script inspired by the article “Maria Índia, ou a fronteira da colonização: trabalho, migração e política no planalto sul de Angola” published by Cristiana Bastos in 2009 in the journal Horizontes Antropológicos.