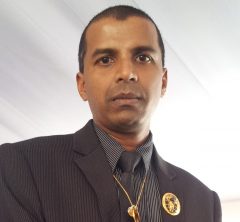 Satyendra Peerthum is a Historian based in the Research Unit of the Aapravasi Ghat Trust Fund (AGTF) which manages the Aapravasi Ghat World Heritage Site [Landing Place of the Immigrants] in Port Louis, Republic of Mauritius. He is a member of the Secretariat of the Indenture Labour Route, the Nantes Indentured Labour History Project, and the La Reunion Indentured Labour Scientific Committee. He is also a part-time lecturer in history at the University of Mauritius, the Open University of Mauritius, and a Mauritian writer. Over the past twenty years, he has specialized in the study of indentured labour, south Indians, slavery, Liberated Africans, maroonage, vagrancy, non-Indian indentured workers, colonial prisons, comparative and quantitative history, sugar estates, wage labour, the Mauritian working class and cultural heritage issues in Mauritius. Mr. Peerthum has produced several TV documentaries and has also published and co-authored on the above-mentioned themes in several academic articles and books in Mauritius, the United States, France, La Reunion, South Africa, India and Zanzibar, Tanzania. Between 2011 and 2017, he coordinated 3 international indentured labour conferences. In 2017, Mr.Peerthum’s ‘They Came to Mauritian Shores: A History of the Indentured Labourers, 1826-1940’ a major180-page  study on the social history of the indentured workers in Mauritius, with a special focus on the lives of 110 immigrants, was launched by the country’s Prime Minister.